We share our immediate airspace with the DGLC (Derbyshire and Lancashire Gliding Club). We also enjoy the use of their excellent facilities – welcoming bar, excellent home cooked food, lecture venue and, for those visiting from afar, very reasonably priced accommodation!  A visit to their clubhouse is highly recommended.

Sailplanes move a lot faster than us, have sharper edges and pilots who can’t bail out as easily as we can, so sharing airspace close to the take off and landing areas presents risks both to us and to sailplane pilots.

The DGLC is based at Camphill on Bradwell Edge. Whilst Bradwell is not an official DSC site, it is highly likely to feature in many XC flights and historically, it has played an important role in flying in the peak, both as a training venue and the start of XC epics. For many reasons it is important to understand and respect how the gliding club operates. Mid-air collisions have proved fatal in the past, and a mid-air with a sailplane or a tow line will very likely be fatal. The disruption caused by failing to fly considerately if in proximity to Camphill can seriously jeopardise relations with our sailplane colleagues.

The most frequent and longest winch runs are north or south along the full length of the airfield, parallel 1ith the edge. A typical launch will involve a sailplane being towed very rapidly indeed to about l200ft then releasing the heavy tow cable and parachute at an acute angle to the winch, allowing it to fall back onto the airfield.

Cables are laid out in groups of four, so a launch rate of one every five minutes is possible, with an interval to tow out the next four cables by tractor. All winches have strobe warning lights (kindly fitted by the DGLC to help our members see from the air when the winch is operating) which flash throughout a launch sequence.

At the launch point the wings of the glider will be levelled and the headlights of the launch control vehicle will flash rapidly to signal “all out” to the winch driver. Any (or all) of these visual clues means that soaring hang gliders or paragliders should clear the area near the winch immediately and allow the sailplane an unobstructed launch. Be very aware that a cable break will involve the sailplane dropping several kgs of assorted shackles, rope and steel cable before he sets up an emergency approach.

They may also decide to take the shortest, fastest and lowest route to the ridge if they decides to use the dynamic lift instead. We don’t want to compound their problems, nor do we wish to act as aerial scrap collectors, so STAY WELL CLEAR.

If the sailplane climbs “off centre” to the general winch run, then they are ‘laying off’ purposely to one side so that the breeze will carry the cable back centrally to the airfield after release.

On rare occasions (when the wind falls light) This ‘laying off’ can result in the cable & chute falling along, or even over, the edge – be aware of the possibility and STAY CLEAR by soaring further upwind of the edge. Observation and anticipation should be the prudent pilot’s priorities here.

It should be abundantly clear from the above that if there are sailplanes preparing to launch, or in the process of launching, then now is NOT the time to consider thermaling back across the airfield at or below sailplane launch height, or indeed to fly in the lee of the edge itself. To do so would be very bad airmanship – at best selfish, and at worst extremely dangerous.

Most sailplane pilots will set up for landing as follows:

After an approach along the ridge from north or south, they will perform a ‘clearing turn’ outwards from the ridge. This is a definite indication that they are leaving the circuit pattern and checking for traffic. On completion of the 360 degree turn they will straighten up, fly back directly over the central gully (Deadman’s Clough) at right angles to the edge and then turn in on finals before landing on the airfield. Critical circuit height is 400 – 600’ above the edge but can be higher depending on conditions. This means that random aerial “parking” over the gully (the one with the pond in it) is NOT a clever idea – low altitude scratching isn’t a problem – but once you are up into the traffic zone – either thermal up and out of it, or leave and fly somewhere else – no aimless lingering, please DO NOT frequent the Deadman’s Clough gully in numbers, particularly slower moving paragliders. Observation and anticipation is essential again here – watch for the clearing turn, – watch for the two seaters, possibly with a pupil in control – look out for fixed wheels or undercarriage doors open – anticipate the approach pattern and don’t hinder it.

Of course we must expect all kinds of different approaches on any flying day – do not forget the enviable ability of a superfast sailplane to land downwind or on the reciprocal, thus positioning themselves neatly over the cable for the next launch.

Maintain a sharp and constant lookout all around for faster moving aircraft; sailplanes travel at three or four times the speed of hang gliders and paragliders and present a very sleek frontal profile that is difficult to see, especially when the sun is low in the west. Acknowledge other aircraft with a wave – this assures the other pilot that they have been seen and that you are aware of his proximity. Never, ever, leave it to the approaching aircraft to break right first – just get on with it!

Should a problem ever arise that needs immediate attention, the DGLC can sound an air horn from the windsock area as a warning signal and they can also contact the DSC on our 2m radio frequency. 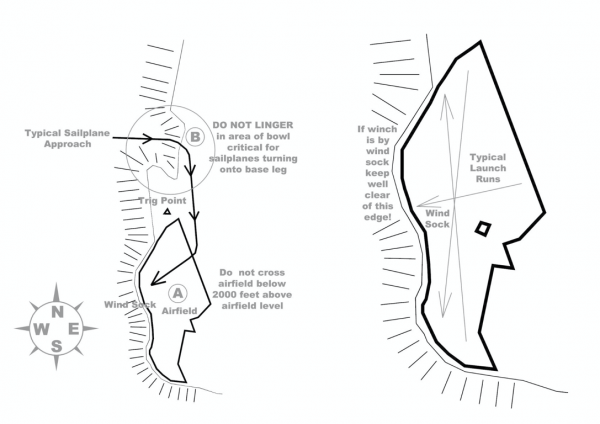